Meeting of the Trustee of King George V Playing Field

Done to Death, by Jove 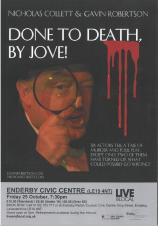 Done To Death, By Jove

What sums up the Show?

'The 39 Steps' meets 'An Inspector Calls' via Agatha Christie and 'Midsomer Murders' in this clever and extremely funny comedy-drama. It's not a new idea, it's not a new plot – it's been DONE TO DEATH, BY JOVE – but not like this! Promise.

'The spectres of Richard Hannay, Miss Marple and Bergerac converge in this clever and properly funny spoof homage to the Great British Detective tradition.

The chaotic plot centres on a six-actor crime stage play made tricky to tell, as with four of the cast stuck in a van by the side of the M6, theatrical knights Gavin Robertson and Nicholas Collett must gamely play all the roles.

Stuffed to the rafters with verbal and physical humour and dollops of unashamed silliness, this is a thrillingly inventive comedy-drama.

A cast of six bring a comic flurry of suspects and characters together to discover who done what, and why… Except, well… four of the cast are stuck by the side of the M6 in the van, so only Gavin and Nicholas have managed to get to the venue… but 'the show must go on', so Gavin and Nick have to take on all the parts - good job they have the costumes and a little of the set. They will probably borrow whatever they can find to use in the hall too…

Playing on a plethora of comic clichés from the Detective genre, Gavin and Nick present you with Lords and ladies, shady servants, secrets, motives and cunning police-work abound in this genre-busting comedy from the Masters of inventive silliness!

Nicholas Collet is an award-winning actor, director, producer and writer. Nicholas has toured village halls and community centres across the UK and audiences may have seen his previous shows with Live & Local: 'Spitfire Solo' and 'Your Bard'. Originally from Sheffield, Nicholas graduated from the University of Birmingham, followed by the Bristol Old Vic Theatre School, where he won the Comedy Prize. Previous theatre work includes the RSC at the Barbican, Bombur in "The Hobbit" in the West End, Pod Clock in "The Borrowers" (UK No 1 Tour) and over 40 shows in repertory.

Gavin Robertson comes from a physical theatre background and produces, creates, directs and performs his own work for national and international touring. He has previously played 'Juror 12' in the award-winning production of '12 Angry Men', with TV celebrity Bill Bailey and a host of stand-up comedians from Jeff Green and Owen O'Neill to Stephen Frost and Phil Nichol. Audiences may have seen Gavin in 'Spitfire Solo', which toured as part of the Live & Local 2018/19 season.

Performance: Done to Death, by Jove at 7.30 pm on Friday 25th October 2019 at Enderby Civic Centre. Doors Open at 7pm. Refreshments available during the interval.