Recognition of Service to Enderby Community 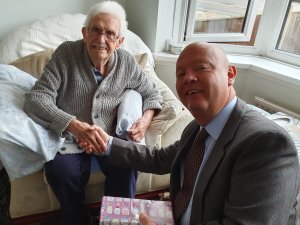 RECOGNITION OF SERVICE TO

Jim Bartlett was born in Leicester but the family moved to Braunstone in 1934, when he was 2 years old. He left school at 14 to work for the West End Funeral Company, Narborough Road. For obvious reasons he wasn't happy there and after about 16 months found a job at Desford Coal Company, training as an Underground Surveyor.

Just before he turned 17, in 1948, he joined the Royal Navy. His first ship was the battleship HMS King George V, a training ship full of boys aged 14 to 15. The daily wakeup call was very early. At 5am the boys had to take off their shoes, roll up their trousers and scrub the deck with salt water. Being a trainee chef, Jim didn't have to do that.

He was with the ship about a year then was sent to his first sea-going ship, HMS Vengeance, a light-fleet aircraft carrier, where he quickly got a reputation for his cobs and ended up as baker to the Admiral of the Air Fleet. He did two stints on the Vengeance, four years in all and thoroughly enjoyed it. He saw action, first on the Suez convoys, where the ship spent seven months going up and down the Canal. The ship was sent to Cyprus, where there was trouble with the E.O.K.A. Jim was a trained fire-fighter by this time and spent time ashore trying to put out warehouse fires which had been started by the terrorists.

He was demobbed when he was 20 and married Teresa. Eventually they bought a cottage in Narborough and Jim started working part-time (nights) with the National Fire Service at Wigston. That was voluntary and unpaid, so he also found a day job at Jones & Shipman, where he worked for 26 years. He was a registered Fire & Safety Officer at Jones & Shipman, as well as a registered Fire Officer at Wigston.

By the early 1960s, Jim and Teresa were living in Enderby but when he had his first heart attack, things changed and both his job at Jones & Shipman and his voluntary work with the Fire Service ended.

Jim became a Parish Councillor for Enderby Ward at a Special meeting of the Parish Council 8th October 2003 and he has served the community as a much loved member since then.

Sadly, due to health reasons Jim resigned 10th September 2019. The Council wishes to convey its best wishes to Jim for his continued good health and thank Jim for his contribution to the Community of Enderby and for his endless supply of extra strong mints. Jim's presence at meetings will be missed by Members and staff alike.